Have you ever just seen something and knew that it was a big deal? Perhaps it made you feel so good about yourself, or maybe it irritated you in the wrong way. Well, that’s what is happening in downtown Phoenix, Arizona right now. A mural has gone up on a billboard that shows a mean photo of President Trump surrounded by nuclear bomb mushroom clouds and Nazi swastikas made out of the dollar bill symbol.

This intense mural rests over the Grand Avenue arts district in Phoenix. Beatrice Moore, a billboard owner who has a display over the artsy part of town, has put up the mean photo of Trump surrounded by swastikas and mushroom clouds.

Moore is an influential real estate professional in the arts area. She owns several buildings in the Grand Avenue arts district and has been an instrumental part of the local Arizona arts scene, which is vehemently anti-Trump.

For those local to Phoenix, you can go witness the anti-Trump billboard yourself on Grand Avenue between 10th and 11th Avenues. Moore owns the property directly below the massive, 40-foot billboard. And renting that place from her is Ruben Gonzalez who has his clothing design shop 11th Monkey.

The billboard was created by Los Angeles artist Karen Fiorito. Moore commissioned Fiorito to make the anti-Trump billboard shortly after Trump won the election. It was installed on Friday, March 17.

Besides the swastika-dollar sign symbol, which was originally created by New York artist Hugh Gran, who gladly gave Fiorito permission to use them, the nuclear mushroom clouds also incorporate clown imagery indicating just what Fiorito and Moore think about the current president. 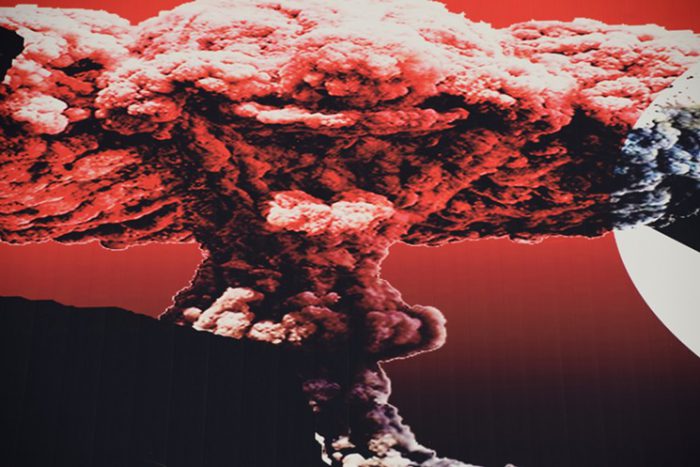 If you look closely at the mural, you can see that there is a detail on Trump that most would miss. Pinned to his lapel is a Russian flag.

Moore always used the billboard for progressive messages. Before the anti-Trump message went out to the public, she used the space to promote recycling.

Because the billboard is so aggressive in its protest of President Trump, there has been a lot of backlash from the conservative community toward the artist. Fiorito has even gotten death threats from people who don’t like it.

Meanwhile, Gonzalez, the man who has to live under the sign every day, loves that Moore has taken a stand in the middle of the Red State of Arizona.

“The art is definitely setting off emotions in people, and we’ve had a decent amount of hate calls and e-mails,” Gonzalez said.

Because the sign has sparked so much outraged, protestors have ventured into the Phoenix arts district to picket in front of Gonzalez’s store. Two days after the billboard went up, two picketers spent hours on Sunday lifting their pro-Trump signs to the air. 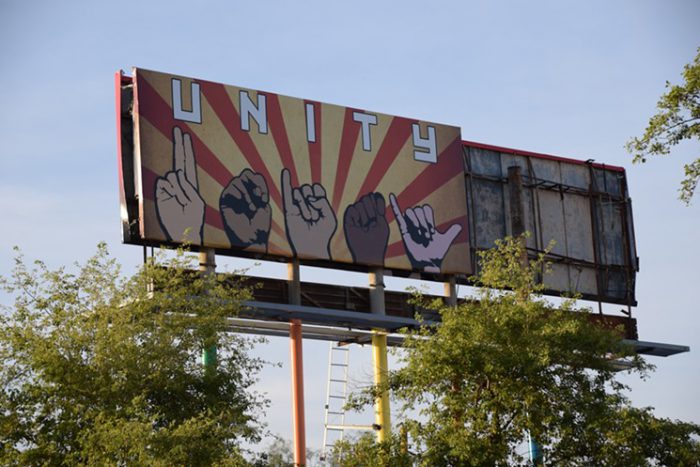 Fiorito wanted to protect Moore because she knew it was going to be a dangerous project. She also created a more positive backside (pictured).

“I was really trying to protect Beatrice,” Fiorito said. That’s why she refused money for the project except for a small stipend. “I wanted to take full responsibility in case of violence.”