What was meant to be a routine trip to Walmart for Kelly Boulay of East Windsor, Connecticut soon turned into a nightmare when she had a close shave with something completely out of place at the store. Kelly had entered the retail store sometime around 9:15 pm grabbed a cart just like everyone else. But the cart she picked ended up being a wrong one entirely.

Just second later she felt something sharp slice into her hand and cut fairly.

As expected Kelly was alarmed. It was even more shocking when she realized what had caused the injury to her fingers. It was a razor blade stuck into the back of the cart handle. Narrating the incident, she said: “I turned my cart around to go down an aisle, and then I caught something on the underside of the handle.

I didn’t know until later that it was a blade. ” Boulay said in an interview with WFSB.

She took to Facebook after the incidence to warn other unsuspecting Walmart customers from suffering the same fate: “PLEASE BE CAREFUL!!!, “Tonight while shopping at Walmart in East Windsor I was sliced by a RAZOR BLADE that someone shoved in the cart handle. I’m so goddamn disgusted and upset beyond belief.” She wrote

Razor blades can cause severe injuries. Cuts from razor blades can even cut straight to the bones if care is not taken. This makes you wonder why someone would even hide such a potentially dangerous object in such a place where it can easily harm someone.

Speaking about the incidence, Det. Sgt. Matthew Carl of the East Windsor Police Department said: “The officers responded and they were able to identify a razor blade that was in the handle of the shopping cart. Unfortunately, this is one of those things that somebody could have done maliciously just for the intent of harming another person.” 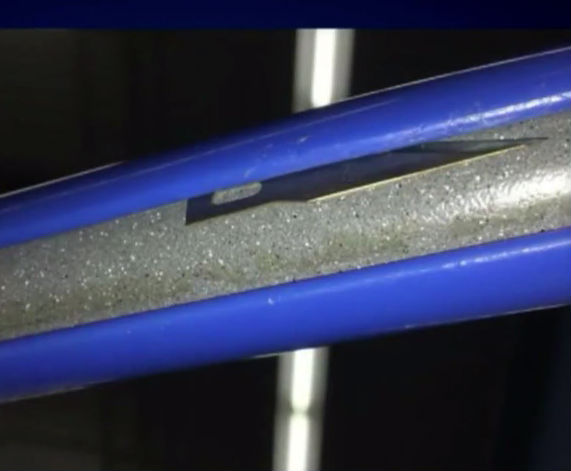 Although Kelly escaped with nothing more than a small cut and probably a lifetime scare of using shopping carts, she knows things could have been a lot worse. It becomes even more frightening when you consider the type of blade which caused the injury.

“That’s a number 11, that’s a surgical razor,” Dr. Katherine Mashey told Daily Mail Online. “Using a surgical blade is frightening to me because one, somebody got their hands on it; Two, to put it in to cause injury, then I question it is their contamination, HIV, hepatitis b, c. So that’s a very scary thing.”

Kelly went to the hospital to have her wound treated then she returned to the store and ensured that the police checked every single cart to ensure that no one is exposed to the same danger that she was. Walmart has also released an official statement about the incident which was described as disturbing.

“We take this matter seriously and have since checked all shopping carts and are currently conducting regular checks,” the statement read.

Although no suspect has been arrested in this case and it’s hard to say if the culprit would ever be caught, you might need to be more careful when using a shopping cart next time and probably check it well before making use of it just to be safe. It is not enough to wonder why anyone would want to put something potentially harmful on a shopping cart, the best line of action is to take the necessary precaution and be more watchful.