Darren and Carolyn Carter from Canada share a passion for killing. That’s why the couples, who ironically describe themselves as “passionate conservationist,” organized a trip into the Kalahari Desert where they went hunting for some of the rarest animals on Earth. Through their trip with Legelela Safaris, the couple shot and killed a magnificent lion and then posed over the animal’s corpse while locking lips with each other.

Because Legelela Safaris often posts pictures of their clients with their latest kills, it surprised a lot of people to see the “conservationists” Carters out there killing for the trophy. Because their picture showed them celebrating the kill and flaunting themselves over it, the image met with a lot of backlash as soon as it started circulating online. 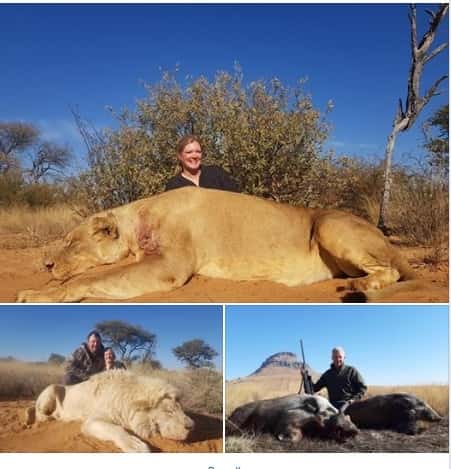 The pictured has angered people for all sorts of reasons. They believe that the government in the area needs to do better to protect these animals from trophy hunters, who simply want to travel to another person’s country to kill the rare animals that have lived there for a long time. Others are angry because the Carters flaunted their kill so brazenly on social media. Others, yet, are outraged because they were led to believe by the Carters themselves that they were conservationists who cared about wild animals and their environments.

The couple in the photo came from Edmonton, Alberta, and were part of an organized tour that helped people kill rare animals in Africa. The couple posed over the lion and other dead animals that they apparently shot and killed while paying high-fees to kill on the continent of Africa.

While the images have caused mass outraged online, the captions sickened many people. 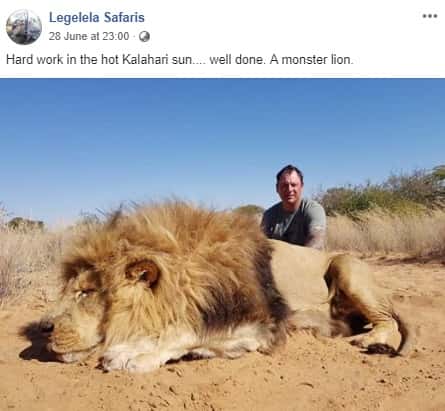 Another caption that shows the dead lion said, “There is nothing like hunting the king of the jungle in the sands of the Kalahari.”

Legelala Safaris has issued a warning about their social media pages urging sensitive viewers to stay away. 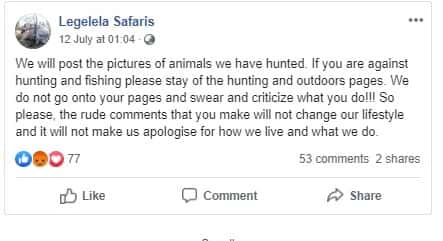 “We will post the pictures of animals we have hunted. If you are against hunting and fishing, please stay of (sic) the hunting and outdoors pages. We do not go onto your pages and swear and criticize what you do! So please, the rude comments that you make will not change our lifestyle, and it will not make us apologize for how we live and what we do.”

The Carters run a taxidermy business and traffic in dead animals. They identify as “passionate conservations” despite their passion for killing rare animals. Because the couple hunts animals that are not protected or sustainable, they are not doing their part of conserving the great nature of the world. 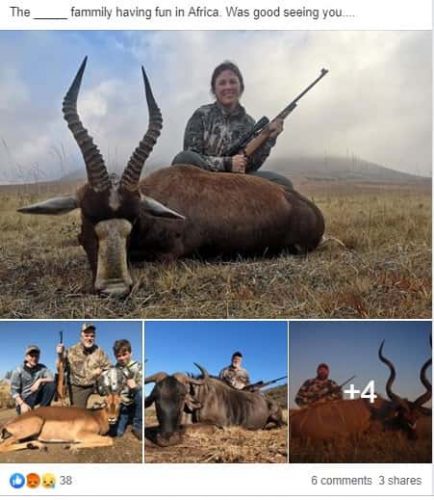 The couple also runs an Instagram account where they show the kills they have made that season. In one picture, Darren stands before a dead black bear with the condescending caption, “Come on the bear season, wakey wakey!”

The couple was asked to comment on the photo of them kissing over the corpse of the lion. They refused and said, “we aren’t interested in commenting on that at all. It’s too political.”

What do you think about these hunting images?