Buskers playing guitar or singing in the streets or subways are often passed over as people hurriedly move to their next destination, but once in awhile a street performer really makes you stop in your tracks. Such was the case of one mystery man who sat down to play piano, earning plenty of looks as he impressed the passersby.

No one could have guessed that the man, dressed in a winter coat with the hood pulled over his head and obscuring his face would do anything more than plunk away. He started slowly with a classical tune that was beautiful, for sure, but then he ramped up to a full boogie woogie and blues jam that made people stop and listen before moving along on their journey.

It’s not easy to get people to slow down and enjoy a musical moment — after all, everyone has got to be someplace — but this man’s immense talent drew plenty of looks and listens, with some people even pulling out their phone to capture the performance on video.

It’s no wonder he’s so talented — this is Brendan Kavanagh, also known as Dr. K, who is known for filming his piano playing at various locations in different outfits. He’s been spotted dressed as a police officer, a pilot, a surgeon, and a construction worker.

Dr. K is a London native with a PhD in English Literature. His musical career has involved playing piano with numerous bands, but now he enjoys showing up for surprise performances that he films — you can check them out on YouTube.

In this video, Dr. K plays a piano that’s part of Yamaha and Transport for London’s #Platform88 initiative, where pianos are installed in various tube stations across London for the public to play.

The Yamaha website explains: “For the next two years, our Platform88 pianos will tour the tube network to give travelers the chance to perform. Which star will launch our next piano and when…?”

Among the many comments left on the YouTube video were those who marveled at the man’s talent, with comments that included: “Dude can play,” “He killed it,” and “That was wicked good.”

Another commenter pointed out that more people should have gathered for this impressive performance: “What is wrong with these crowds? They just walked by and gave him a wary glance. This Maestro don’t deserved just a glance. People should be stopping and gathering around him and listening to him play his masterpiece and they should be dropping coins in that plastic drinking cup on top of his piano. But people don’t care. And, those two kids? They probably think that this man is a beggar. And who gave that applause after the last note? Was that the camera man?” 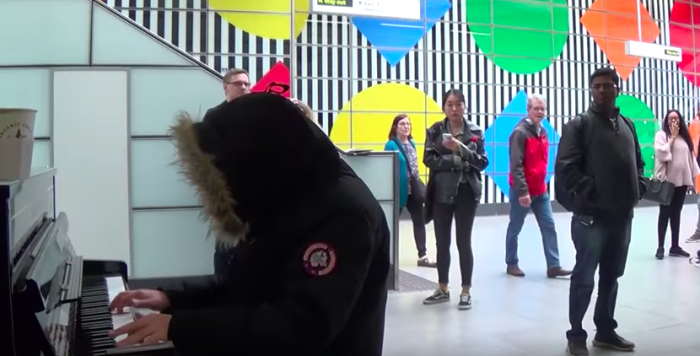 Another person agreed, sharing: “I prefer hip hop music and rock / nu metal. I would have stopped as even this would have turned my head. If you’re in that much of a rush to not be able to spare 80-90 seconds then you’re probably in a rush to jump in your grave as well. Admire the little things as well. Enough said.”