Feel-good stories about airlines seem to be in short supply these days, but this encounter aboard United Airlines will definitely warm your heart. When loyal Delta customer Rebecca Kuchar Krutz found herself aboard United Airlines in a first-class seat, she witnessed the airline’s CEO, Oscar Munoz, boarding the plane and taking his seat in the economy section.

Rebecca explained what happened next in a Facebook post, noting: “I’m a pretty loyal Delta Airlines customer. But tonight I was on a flight w the CEO of United. I was a bit surprised seeing him walk back into the economy section of the plane to take his seat. Seated in front of me on the plane was an elderly lady in her 80’s (maybe even early 90’s). She didn’t appear to be in great health and had a bit of a hard time with her speech. Prior to boarding, I’d seen Oscar (the CEO) make his way out of a crowd of people in order to go over and speak w her.”

Rebecca noted how sweet he was to take the time to speak with the woman, but his kindness went one step further, as he insisted that the elderly woman take his first class seat.

When the plane landed, Rebecca heard the woman tell the man next to her that it had been a while since she’d been on a plane and she was very nervous. She was especially thankful that Oscar had given up his first class seat to make her flight experience more comfortable. 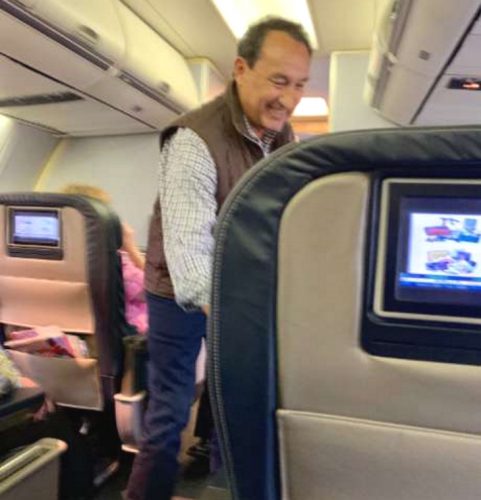 Rebecca remarked in her post: “That, ladies and gentleman, is how it should be done. Treat our elders with the respect and care they deserve. I may very well be a lifelong United customer after witnessing that act of selflessness by a man who likely has his own private plane, and yet was humble enough to give up his seat to an elderly lady he’d never met before, because he thought she’d be more comfortable there.”

Oscar’s generous spirit certainly captured Rebecca’s attention and impressed her greatly as she asked the Houston Chronicle to relay this message to Oscar: “I was brought up in a house where we were taught to respect our elders. I have a grandmother in her 90’s and if she walks into a room where family is seated, we rise and offer her the most comfortable seat. We do this out of love and respect as she is the matriarch of our family and we feel she deserves to be treated this way.”

She continued, praising the CEO for his kindness, noting: “You did this exact thing; only for a woman you’d never met before, and likely will never cross paths with again. Thank you for extending such kindness and respect to an elderly passenger. While it may have been a small gesture for you, I can assure you it meant a great deal to her, and though I don’t know her, it meant a great deal to me as well. If even half of the people on this earth could behave in such a way, the world would be a much better place.”
Loading...
Loading…